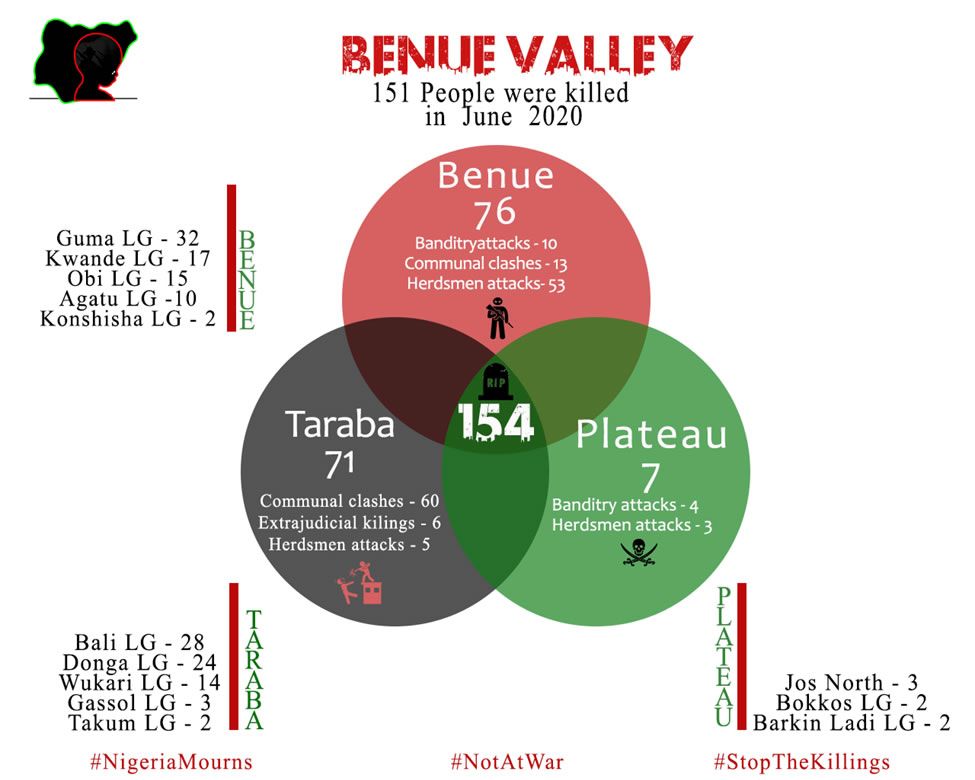 For the last decade, Nigeria’s Benue Valley – Benue, Taraba, and Plateau states – has been a theatre of protracted conflicts, aggravated by climate change, the competition for land and water, and the proliferation of small arms and light weapons, amid ongoing communal tensions, and more recently, banditry attacks by militia groups.

This cobweb of conflicts has continued to result in the monumental loss of lives, livelihoods, and property of citizens in the region, for which there have been no accountability in spite of several panels of inquiries set up to address them and the deployment of law enforcement to the region. In June 2020, at least 154 organized violence related killings were recorded within Benue, Taraba and Plateau states. These killings were attributed to banditry, militia herdsmen attacks, communal clashes, and extrajudicial killings by the Nigeria Army. This brief provides a synopsis of our findings.

Below is the breakdown of casualties recorded in the affected areas:

Despite military operations and police deployments in these areas, insecurity persists with recurring attacks by bandits and militia herdsmen. Communities continue to live in constant fear of attacks. Worse still, they are unable to report the situation to the media for fear of being victimized by the government and even law enforcement.

Taraba state alone accounted for almost 50% of the total killings recorded in the Benue Valley in June 2020. Of the numbers recorded, 71 persons were killed in communal clashes, militia herdsmen attacks, and extrajudicial killings by soldiers of the Nigeria Army. The impacted areas were:

Of these numbers, 60 killings are attributed to the agelong Jukun/Tiv ethnic crisis. Military reports from the area suggest an infiltration of bandits in the communities which has further complicated the Jukun/Tiv clashes. Also, members of some impacted communities have accused officers of the Nigeria Army of raiding their communities, raping women, and destroying their property. It was during one of these raids in Donga LGA, that a Mr. Vihishima Aondowase, his wife, his 9-year old child and his cousin were allegedly killed by soldiers on their way home from a hospital. While the Nigeria Army has refuted these allegations, findings and sentiments from the impacted communities depict strong disapproval of the inordinate use of force by the Nigeria Army in the area and a growing distrust of its ability to secure the area from attacks.

Plateau state recorded the least numbers of killings in the Benue Valley in June 2020, with seven reported killings from herdsmen and banditry attacks, impacting Bokkos, Mangu, Bassa, Riyom, Jos North and Barkin Ladi LGAs. Three of these deaths included farmers who were allegedly killed by armed herders on their farms.  Despite the relative peace in the state, residents continue to live in fear of attacks, particularly from militia herders and organized criminal bandit groups.

The growing trend of these attacks in the Benue Valley closely follows the insurgency in the Northeast and the militia attacks in the Northwest, particularly in terms of casualty figures and territories lost by the Nigerian Government to these armed attackers. With continued arms trafficking, and the steady migration of pastoralists from the Northwest region into parts of the Middlebelt, including the Benue Valley, an intensification of the situation in the region is imminent. Thus, it behoves the government to: