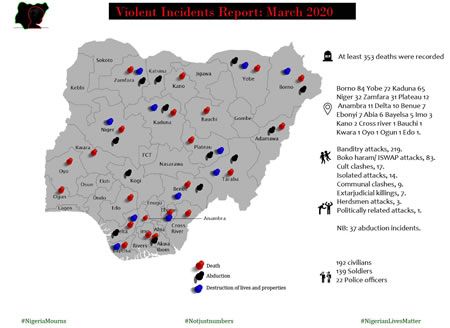 While the entire country was focused on the global Covid-19 pandemic which led to the death of 4 persons, in the month of March 2020, Nigeria recorded the loss of at least three hundred and fifty-three 353 lives to violent mass killings across the country.  The recorded attacks bordered around continued terrorism, banditry/pillage attacks, targeted and coordinated abductions, and extrajudicial killings perpetuated by security personnel.

Below are highlights of incidents that occurred in the past month

The numbers in the month of March continue to point out the deliberate targeting of security officers by insurgents. For instance, at least 83 persons were killed in 7 insurgent attacks in the North-East.  Of the stated number, at least  50 were soldiers  who had been killed in an ambush by suspected Boko Haram gunmen near Goneri, a village in Yobe State. ISWAP insurgents also killed 5 police officers in Dapchi, Yobe State.

Again, members of a joint security patrol team compromising of the Nigerian Army, the Police Force, and the Nigerian Security and Civil Defence Corps were attacked by unidentified armed men around Galkogo Forest, Shiroro Local Government Area of Niger State leading to the death of at least 29 agents. In a similar fashion, at least 70 soldiers were killed when ,  rocket-propelled grenades were fired on their convoy in an ambush, as they travelled near Gorgi village in Borno State.

In this single month, a total of 161 security persons were killed.

The targeted attacks on security personnel by the terrorists and the successes of these ambushes buttress claims by security critics that the Nigerian Army has largely been underequipped and are in need of more protective gears.

In a coordinated pillage of five villages – Hashimawa, Marina, Kerawa, Unguwan Musa and Zariyawa – in Kaduna State, at least 51 people were killed and millions of Naira worth of properties destroyed. The incident in Kaduna was not an isolated one, there were at least, 27incidents of bandit attacks/pillage  which accounted for at least 219 deaths in March alone.

In spite of several highway security checkpoints spread across the country, attacks on, and kidnappings of commuters have persisted. Of the 37 incidents recorded in March, at least 4 persons were killed. It is important to note that while many of these abductions are reported in the media, the outcomes of such abductions are not always reported. Also of importance is to highlight that, upon observation, these highway attacks and abductions have been more coordinated in North, as compared to the South. This could be linked to the fact that most highway attacks in the North have been undertaken by bandits. Notable of mention is the attack and abduction of 23 passengers traveling between Minna, Niger State and Katsina, kidnapped by unidentified gunmen. As at the time of this report, there has been no update on the status of their cases.

Extrajudicial killings by state security agents have remain a recurring theme in our reports. In total, 7 lives were lost to extrajudicial killings in March. 2 of the incidents were attributed to “stray bullets”  Of particular note was the tragic killing of a 15-year-old girl, identified as Sekinat Agbelade, who was shot dead by Nigeria Customs Service agents at Agosasa, Ipokia Local area of Ogun State, while in pursuit of suspected smugglers. Also, the military has claimed that an attack on Ezetu Community, in Bayelsa State, which led to the deaths of 2 persons was “accidental”, following the burning of a military houseboat by unknown persons.

Whether the officers that shot these victims had been identified and arrested remain unknown, as there have been no records of neither an investigation nor prosecution.

The highlights above have painted a dreary picture of the declining state of security and human rights in Nigeria. The violent incidents of 2019 recorded a minimum of 3188 lives lost; it is therefore disheartening that the first quarter of 2020 alone has recorded the loss of at least one thousand one hundred and forty-two (1,142) lives to violent killings in Nigeria.

The trend of events this month reveals the vulnerability of the Nigerian forces in the Northeast. This has made them, as well as the residents of the restive region, easy targets of the terrorists. Another red flag is the limited capability of our security operatives to curtail attacks on commuters and residents in the region. The abysmal failure of the Nigerian leadership to rise to the security challenges of the country must be redressed. The security of the entire nation has to become a priority for the government at all levels, in order to curb the menace and ensure the safety and security of the Nigerian people.