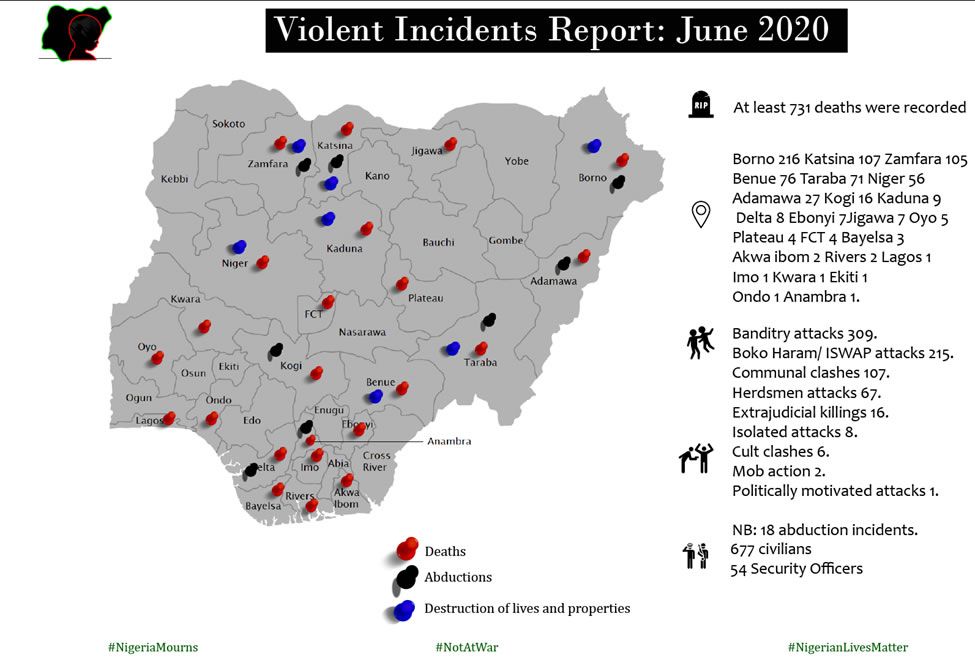 Last month, Nigeria’s security situation continued its steady plummet —  Our monthly tracking of killings across the country revealed an uptick in the number of casualties of violent organized criminal activities,  from three hundred and sixty-five (356) the previous month,  to seven hundred and thirty-one (731) in June.

Particularly devastating was Boko Haram’s attack on Gubio, Borno state, which led to eighty-one (81) deaths. It took less than two hours for the attacking gunmen to kill more people in than Covid-19 reportedly had in the past 3 months throughout the state. As at the time of documentation, thirty-four (34) deaths had been attributed to Covid-19 in Borno.

In a similar fashion, armed men killed at least twenty-three (23) people in an attack on Ruwan-Tofa community in Dansadau district of Maru Local Government Area of Zamfara State.

At least six (6) soldiers were killed and 45 others were reported missing after an attack on Auno military base, 15 miles from Maiduguri, Borno state.

In the deadliest attack of the month, eighty-one (81) persons were found dead after dozens of terrorists invaded Zowo, Gubio Local Government Area of Borno State.

in Maiha Local Government Area of Adamawa State, Arabo Dauda, a 20-year-old motorcyclist, was shot dead by a policeman over his refusal to give N100 bribe.

One person was reported killed and four others injured after soldiers of the Nigerian army attached to the 7 Division attacked officials of the COVID-19 Committee over a heated argument, this incident occurred at Auno checkpoint in Borno State.

A family of four (4) and two (2) others were killed in Donga, Taraba State by soldiers during a raid on the Tse-Juku community to repel militia attacks.

The alarming trend of security agencies attacking one another played out again when seven (7) policemen attached to the Bayelsa State Police Division were shot dead during a clash with the Delta State SARS operatives. It will be recalled that in the month of May, we recorded an incident where a trigger-happy policeman had killed his colleague at Ikoyi, Lagos. In June, another drunken Police Sergeant was arrested for allegedly killing an Inspector, simply identified as Inspector Adekunle.

While the death toll from violent attacks have steadily reason in the past few months, Nigeria’s security agencies  have also claimed the successful repeal of organized criminal groups, and have announced killing
166 terrorists.

The numbers and incidences of organized mass killings in June underscore the frailty of security in Nigeria, it foreshadows the vulnerability of Nigerians and the widespread terrorism nationwide. Three hundred and nine (309) deaths were attributed to banditry attacks, while terrorist attacks accounted for two hundred and fifteen (215) deaths. The number of killings by Boko Haram took an alarming turn, compared to twenty-seven (27) deaths the previous month.

The onslaught against security forces has also continued unabated. While, we might share numbers, it is critical to remember that these officers were Nigerians too with identities and families. For instance, in a viral video, Boko Haram terrorists executed a soldier identified as Corporal Emmanuel Oscar, and a policeman, Inspector Yohanah Kilu.While they are tasked with the protection of lives and property, their own lives matter too and are deserving of protection.  The continued trend in which security officers are ill equipped to ward off insurgent attacks remains unacceptable and in need of citizens demanding accountability.

Nigeria is in an existential battle for its own soul. The factors that continue to contend against it have recently been further complicated by the Covid pandemic. Interestingly,  while a little over five hundred and ninety (590) lives have been lost to Covid-19 since its first recorded case in Nigeria in March ; at least seven hundred and thirty-one (731) lives were lost to insecurity in a single month in spite of the number of years and resources annually deployed to security in Nigeria.

Whilst juxtaposing the violent killings in 2019 and the trajectory of killings in 2020, we observed an increase.
In 2019, Nigeria lost three thousand, one hundred and eighty-eight (3188) lives to mass violence, and in just the first half of 2020, we have lost at least Two thousand, five hundred and three (2,503) persons.