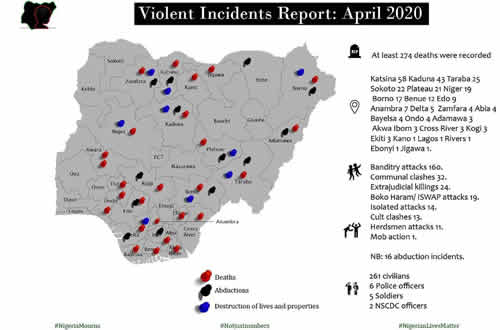 As COVID-19 continues to ravage every nation on earth, Nigeria also continues to contend with managing the crisis of violent killings. The record for the month of April via our tracking system shows that, at least two hundred and seventy-four (274) persons lost their lives to violent killings across the country. Particularly disturbing was the high-handiness of security personnel while enforcing the COVID-19 lockdown orders. These ferocious acts alone led to the death of 24 persons. Other recorded attacks comprised of banditry/pillage attacks, continued terrorism, abductions, and isolated attacks.

Below are highlights of incidents that occurred in the April 2020.

In a pillage of three local government areas in Katsina State – Dutsinma, Danmusa and Safana -, at least 47 persons were killed. Normalcy was not restored until a joint team of security personnel was deployed to the scene.

Again, no fewer than 22 persons lost their lives to banditry in Gangara village of Sabin Birni Local Government of Sokoto State.

In another incident, hours after gunmen killed three persons in Ancha community in Bassa Local Government Area of Plateau State, seven persons were hacked to death in the neighboring Hukke village in the same local government area.

160 deaths were attributed to pillage/banditry in April 2020. Witnesses confirmed that these bandits operate freely,  attacking in their hundreds, shooting sporadically, razing down houses and leaving the communities littered with dead bodies.

Killings perpetuated by security officers remain a constant decimal in our reports. Amidst the coronavirus pandemic, security agents were responsible for the death of 24 persons while carrying out their duties.

A man identified as Joseph Pessu was killed during a clash between angry youths and soldiers enforcing the stay-at-home order in Delta State.

In Kaduna State, 2 incidents of extrajudicial killings which involved officers of the Nigerian Police Force and correctional service officers were reported. These incidents led to the death of 11 persons.

There was no further news about the apprehension of the officers responsible for these deaths.

In the wake of the lockdown order, robbery took a greater dimension as armed robbers numbering at least 20 invaded areas such as: Alakuko, Ijaiye, Meiran, Iju-Ishaga, Fagbenro Street, Kola, all in Lagos state suburbs.

Residents were overtaken with fear and most of them remained indoors while others mobilized and engaged the robbers in a confrontation, to repel them from further carrying out the heinous act. The Lagos state police command also increased personnel deployment to affected areas and gave out emergency numbers to call in case of attacks.

The depreciating spate of security in Nigeria has continuously caused citizens to become reactive rather than proactive. It is therefore paramount that we document these deaths, to give analysable data to discuss ways to prevent reoccurrence and enforce tighter security laws to manage and resolve the insecurity situation.