As you may know, the pandemic rise in violent conflicts across Nigeria in the past decade has become more pronounced in the past 5 years and has resulted in an unprecedented humanitarian crisis that is spiralling out of control. The trajectory of these violent conflicts have taken a pandemic turn since the first quarter of this year, with no visible sign of abatement.

For example, in spite of gross underreporting, in Benue State alone, between 2013-2016, official reports have estimated that 1,878 persons were killed, 222 disappeared and 750 grievously wounded. This number included 526 women, 200 (38%) of whom were pregnant, and another 231 (44%) nursing mothers. In the first quarter of 2018, at least 600 persons have been killed in the same state. In January and February 2018, the Benue State Emergency Management Agency, BSEMA, recorded 169,922 internally displaced persons. The killings affect 12 of the 23 local government areas in the state. More than 10% of the population of Benue State have been directly affected by this crisis. Other states in the Middle-Belt region and around the Benue Valley: Plateau, Taraba, Nassarawa, Adamawa, Kwara, Kaduna and Kogi have also been impacted by this crisis and have recorded a combined number of casualties almost equal to that of Benue state in the first quarter of 2018.

In addition to the on-going violence in the North-East region, the skirmishes in the South-South and South East regions, Region, The North-West and South-West regions are also contending with violent killings and kidnaps.  Their spread reminds us that these crises affect every Nigerian and that their continued impunity will bear consequences that we all will be impacted by if we fail to act. The response of stakeholders to these spates of violence will either catalyze action to ameliorate them or lead to further fragmentation of our already shaky nationhood.

While it might appear that Nigerians have become totally desensitized to these killings and that we treat the casualties simply as numbers, most of us are in fact traumatized and engulfed by a sense of helplessness. In our collective despair, never have we felt more divided and insecure.  It behoves upon us, therefore, to unite in our grief and demand for our government to act responsibly to address these killings, and put a stop to the impunity that has caused the violence to thrive. Hence our call for a national day of mourning and remembrance. 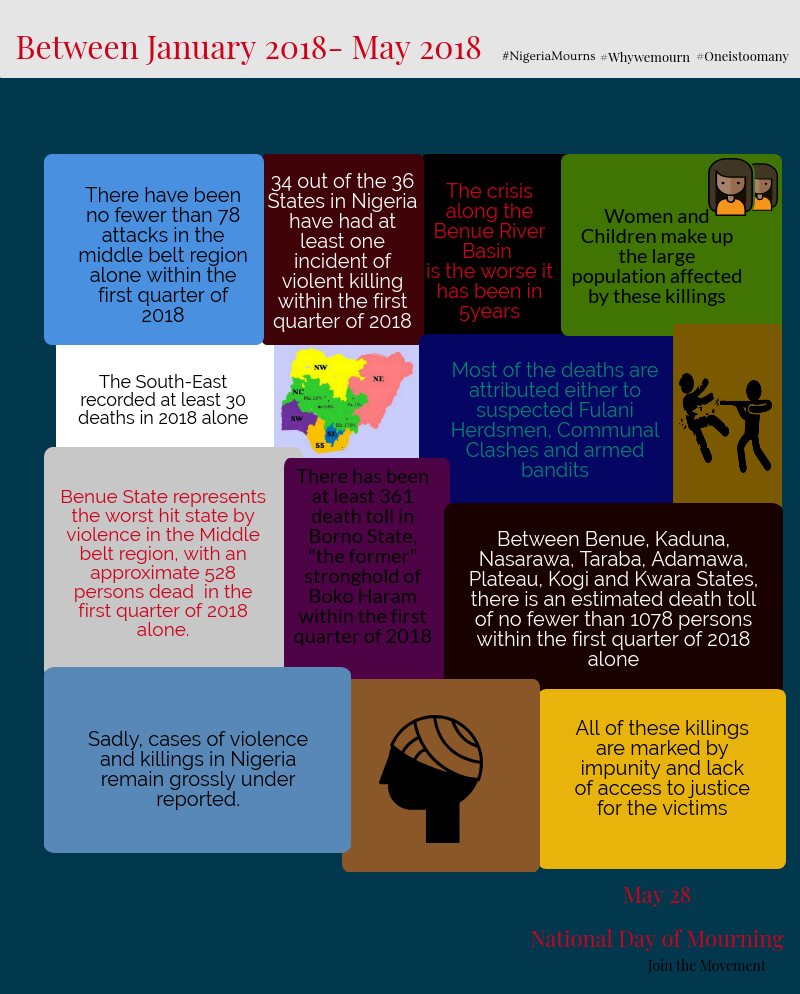