The month of October was characterized by a spontaneous rise in citizen protests across Nigeria and the diaspora in what is now known as the #EndSARS movement. The movement decried the insecurity citizens of Nigeria suffer in the hands of state security forces, and in particular from an anti-armed robbery special unit known as The Special Anti-Robbery Squad (SARS), that was created to combat an increase in armed robbery and crime but which became popular for acting illegal: arrests, torture, extortion, extrajudicial killings and other forms of human rights violations.

The #EndSARS movement was peaceful and it remained predominantly so but for the intrusion of state security agents at protests venues, disrupting the protests by deploying tear gas, water canisters, and live ammunition to peaceful protesters.
Our data collation informs that there were at least four hundred and nineteen (419) deaths occasioned by atrocious violence in October 2020. One hundred and thirty-five (135) of these killings were attributed to the #ENDSARS protests.  It is important to mention that at least one hundred and twenty (122) people were killed by state security agents from January to September 2020.
Other violent incidents within this period include coordinated banditry/pillage attacks, unrelenting terrorism in the North East, and pockets of communal clashes.

Below are highlights of incidents that occurred in October:

END SARS PROTESTS
Background:
On October 2nd, a viral video emerged on the internet where some suspected SARS officers were seen to have accosted and gunned down a young man in Ughelli town in Delta state. The man was left in a pool of his own blood as they fled the scene in the car of the young man that had been gunned down.
The amateur video of this unidentified sparked outrage across Nigeria. This occasioned the resurgence of the digital protest with the hashtag #ENDSARS which eventually developed into physical protests. The hashtag #ENDSARS first emerged in 2017 as a Twitter campaign with Nigerians sharing their horrendous experience in the hands of SARS while calling for the disbandment of the unit.  It remained a digital campaign until Nigerians felt the time was ripe to physically express their grievances towards the complacency of the government in meeting their requests.
Prior to the 2020 protests, the Inspector General of Police (IGP) had announced the disbandment of SARS at three different times. So, when the disbandment was announced again in October, as distrust had already been earned by government, the protests continued and protesters called for veritable action to be taken towards reform of the entire system.
The protests spanned 21 States (Lagos, Delta, Oyo, Edo, Osun, FCT, Kano, Abia, Plateau, Rivers, Enugu, Ebonyi, Kaduna, Gombe, Ekiti, Ondo, Ogun, Anambra, Imo, Cross River, and Kwara) and had remained peaceful till they were attacked by pro-SARS protesters who in most instances had access to assets of the state. Security forces had also in some states, including the FCT, sought to violently repress these protests.
On October 20, uniformed soldiers opened fire on unarmed protesters, who had been sitting, holding Nigerian flags and singing the national anthem at the Lekki Toll Gate #EndSARS protest grounds. The numbers of casualties are still being contested. But from our verification,  least 12 protesters were killed. A number of injured victims went into hiding to avoid further victimization by the security forces who initially were in denial that the incident occurred at all. Snippets of the sporadic shooting and the aftermath of the shooting showing protesters trying to revive other injured protesters was transmitted to thousands of viewers via an Instagram live video streaming by a Nigerian Celebrity, popularly called as DJ Switch.
In a confusing sequence of denials, admissions, and retractions, the Nigerian government has sought to exonerate itself of the killings at Lekki . But the big question remains “who gave the order?”
Did the government do enough to prevent the killings and carnage that followed the resistance to the protests across the country?
We recorded that not less than one hundred and thirty-five persons were killed in the aftermath of the resistance to the protests, and not a single assailant was arrested or held responsible for these killings. Of the 135 persons killed, 17 of them were law enforcement officers caught in the frays of the violence. We salute their gallantry and ask that justice be sought for their killings as well. 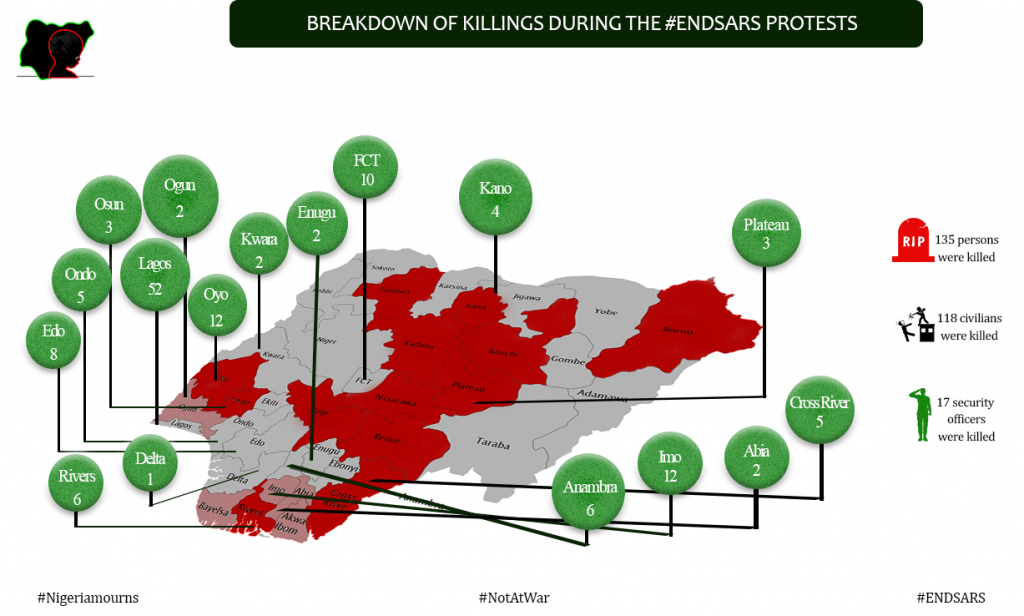 BANDITRY
Killings in the North West have continued unabated despite security reinforcements in the region. At least nine (9) persons were killed and many others sustained injuries after bandits attacked Tsauwa and Gandu villages in Batsari Local Government Area of Katsina State.  It will be recalled that Tsauwa Village had been previously ransacked by bandits months ago in a reprisal attack.
In Faskari Local Government Area, eight (8) persons were killed by unidentified gunmen in Shau Village, while fourteen (14) others were killed in the Ruwan-Gaudiya community.
In another incident, seventeen (17) persons, including one police officer were killed in a gun duel between bandits and security personnel. The policemen attempted to combat a banditry attack on Diskuru village, Dandume LGA, Kastina State.
The crisis in Kaduna is yet to be contained and residents of Southern Kaduna continue to live in fear. Unidentified Gunmen attacked Kidandan and Kadai villages leaving twelve (12) people dead and seven others seriously injured. Scores of persons were also kidnapped. These incidents have driven up the number of residents in IDP camps, as many residents are too afraid to return to their homes.
The situation in Zamfara State has also remained distressing. At least twenty-two (22) persons were killed during an attack in Tunga Kwana Community, Talata Mafara Local Government Area.

BOKO HARAM/ISWAP
In Borno state, 14 farmers in Ngwom village, and 8 others in Moranti lost their lives after the insurgents attacked them on their farms.
At least seven Nigerian soldiers were killed and several others went missing after an ambush by Boko Haram insurgents on the Gubio-Magumeri Road in Borno state.

SECURITY FORCES “VICTORY RECORDS”
While the death toll from violent attacks has steadily risen in the past few months, Nigeria’s security agencies have also claimed the successful repeal of organized criminal groups, and have announced killing 72 terrorists. Below is a breakdown of the number of terrorists killed by security forces in each state:
Borno: Dikwa (10) Abadam (20) Gwoza (10)
Katsina: Batsari (30)
Kaduna: Kachia (2)

SUMMARY
In a major escalation of aggravated feuds between the Government and Nigerian people, October ushered in a tipping point in Nigeria’s “democracy”. The growth and decentralized coordination of #EndSARS protests during the #ENDSARS protests shows that the people are truly tired of inefficient governance across all spheres.
In addition to the one hundred and thirty-five (135) persons that were killed during the protests, our data tracking revealed that 9 other people were killed by security officers. This confirms that the Nigerian Security apparatus needs reform and quickly.
Impunity remains the crux of insecurity in Nigeria, the lack of transparency and accountability has exacerbated the frail state of affairs in the country. Impunity and strengthens the perpetrators of mass atrocities.
While it is pertinent that state security forces must be held accountable for their crimes, the government must address the systemic challenges that deter police reform. They must also go further to close coordination gaps within the security apparatus.
Section 33 (1) of the Nigerian Constitution (“the Constitution”) provides that persons living in Nigeria, shall have a right to life and no one shall be deprived intentionally of his life unless in the execution of the sentence of a court of a criminal office of which he has been found guilty.

Is the Nigerian government upholding the right to life of Nigerians?