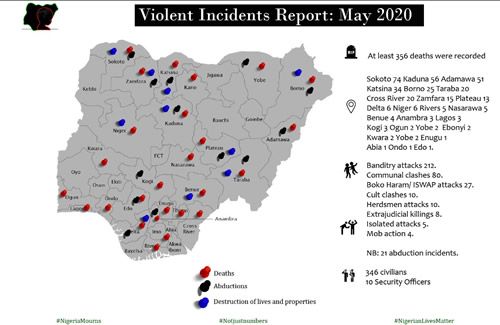 Even within the context of the global pandemic, Nigeria still struggles with inordinate and escalating violence in most parts of the country. Our report informs that Nigeria recorded at least three hundred and fifty-six (356) deaths in May 2020. Of particular note was the escalating pillages in Southern Kaduna, which led to the loss of at least fifty-six (56) human lives, and the loss of homes and livelihoods on a mass scale. The situation occasioned a nationwide outcry with the hashtag “#SouthernKadunagenocide” on social media, where it was described as a massacre. Other violent incidents experienced within this period include terrorism, communal clashes, extrajudicial killings, and rival cult clashes.

In another incident marked by wanton destruction of lives and property, seventeen (17) persons were killed in Gonan Rogo village, Kajuru Local Government Area of Kaduna State. Two weeks later, communities in Kajuru a repeat attack led to the death of 20 people.

At least seventy-four (74) people lost their lives, with many more wounded, when bandits, estimated to be about a hundred, stormed villages – Garki, Dan Aduwa, Kuzari, and Katuma – all in Sabon Birni Local Government of Area of the Sokoto State.

Not less than forty-eight (48) persons were killed in a clash between the indigenous Chobok tribe and their Hausa settlers in Tingno, Lamurde Local Government Area, Adamawa State.

No fewer than fifty (50) persons were abducted while over 300 farmers sustained various degrees of injuries in a bloody communal clash between Omor and Umunbo villages in Ayamelum Local Government Area of Anambra State. In unrelated circumstances, three (3) persons were also killed and fifteen (15) others injured in a land tussle between Urum and Achalla communities in Awka North local government area of Anambra State.

In Cross River State, at least fifteen (15) persons were killed during a communal violence in Biase, this was a clash between youths from Afono and Ibini communities. 5 people from Ibini were killed while 10 people from Afono died.

Two (2) soldiers were killed in a clash in Gujba local government area of Yobe state.

In another incident, twenty (20) persons were confirmed dead after gunmen suspected to be members of Boko Haram attacked Gajigana village in Borno State.

Covid related killings appear to have continued in spite of widespread condemnation and the National Human Rights Commission’s statement against this form of extrajudicial killings. Nigerian soldiers killed four (4) civilians while enforcing the lockdown orders in Karim Lamido, Taraba State.

Rinji Peter Bala, a 20-year-old student of the University of Jos, was first arrested by vigilantes alongside six others for violating the lockdown order. Shortly after they were released, officers of the Nigerian Army “accidentally” shot and killed Rinji.

An unidentified inmate was reported dead from a shot fired by a prison guard, at the Nigeria Correction Service, Aba. This happened when some old inmates had tried, but failed to escape from the prison.

A police officer attached to Bomadi Divisional Police Station, shot dead an army officer attached to 222 battalion in Agbarha-Otor, Ughelli North L.G.A Delta State. This incident occurred after an argument between a group of soldiers and policemen over implementation of the dusk-to-dawn curfew in the area.

Five Nigerian soldiers were killed in an attack on a military outpost by ISWAP terrorists in Mainok, Borno State.

A police officer identified as Insp. Felix Egbon was shot dead by unknown gunmen while enforcing the COVID-19 curfew in Auchi, Edo State.

The numbers in May further highlights the many points of fragility of the states within the context of growing insecurity across Nigeria. Two hundred and seventeen (217) deaths were attributed to banditry attacks, while communal conflicts accounted for eighty (80) deaths. Since the outbreak of Covid-19, we have lost three hundred and fifty-four (354) persons to the pandemic; on the other hand, we have lost six hundred and thirty (630) persons to insecurity.

The big question that continues to elude Nigerians is how to resolve their “insecurity epidemic”. On the 28th of May, 2020, citizens across the country took to social media to commemorate the 3rd National Day of Mourning. All day, the hashtags “#NotAtWar, #NDoM20, #NDoM2020 #NigeriaMourns trended. Most of May, they also maintained the crescendo on violence in Southern Kaduna. Despite the sustained outcries for accountability of the country’s security architecture, and justice for victims, government appears to still struggle with its responsibility of fulfilling its constitutional obligation to protect lives and properties.

In responding to these trends of violence, it is important to ensure an all of government approach, and not a ‘not for us without us’ stance. For instance, Nigeria’s security architecture is not limited to just its security agencies, the failure of other departments of government exacerbate conflicts and crime across the country. Corruption is another virus that has impacted the lives of most Nigerians worse than the Covid19 virus and is in need of concerted efforts across government to end.  Climate change consequences, dwindling natural resources – in particular, land and water, limit livelihoods and incite communal tensions. Population implosion coupled by mass illiteracy and energy deficit are resulting in mass unemployment and gendering organized crime. Failure to address past atrocities are further snowballing ill-will and aggravating past wounds. If Nigerians will demand accountability not just for accountability of the security agencies, but demand for government to address all of these issues, they will move closer to addressing the endemic violence.