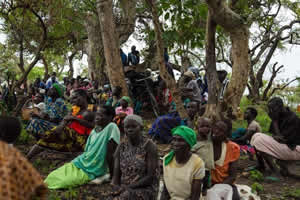 In the month of February 2020, we recorded 374 violent deaths related to mass atrocities across 21 states of Nigeria. This was a slight decline in the number of casualties from the previous month with a record 415 deaths. These deaths are traceable to specific attacks: terrorism, banditry/pillages, herdsmen/farmer attacks/clashes, communal conflicts, political attacks, extrajudicial killings, one-off incidents, mob action, and cult/ gang clashes.

The most prevalent security challenge in this period was banditry/ pillages, which were recorded across the six geo-political zones of the country and accounted for the highest number of deaths – 172. Particularly disturbing was the attack and arson of 5 villages in Plateau state with at least 26 persons killed and 190 houses razed. The perpetrators of this unfortunate incident were, at the time of this report, yet to be identified. Relatedly, terrorists attacked Auno village in Borno State, killed at least 10 persons and destroyed 18 vehicles.

Similarly, a volatile Tiv/Junkun communal clash in Ibua community, Taraba state, led to the death of at least 2, and the related displacement of more than 100 persons.
Extrajudicial killings have continued in a worrying trend. In February 2020, a naval officer in Bayelsa state shot and killed a woman identified as Precious Okwuadigbo in the course of a heated argument. Another unidentified woman was shot dead by a police officer in Edo State. A protest by enraged residents was spurred at Sagamu, Ogun state, when Kazeem Tiaminyu, a player with Remo star football club was killed by policemen attached to Sagamu division. Responding to the protests in Ogun State, the policemen shot sporadically into the crowd, killing at least 6 people, while many others sustained varying degrees of injuries.

Our tracking highlighted a series of coordinated attacks on road commuters, resulting in commercial kidnaps and sporadic killings. For example 30 people were killed on the infamous Maiduguri – Damaturu road, 4 on the Benin – Owo road and 10 on the Benin – Ore road. 4 NSCDC officials who were en-route Benue state, were abducted in Alao-offoke community, Kogi State.  We also note from anecdotal evidence that most of these types of cases remain unreported.

According to S 14(2)(b) of the Nigerian Constitution, the primary objective of government is to ensure the security and welfare of citizens. Despite government’s claim of being on top of the security situation in the country, the spread and contexts of insecurity have metastasized and show no signs of abating, in spite of the enormous budgetary allocation to security.

We advise that it will occasion more than security hardware to end thae pandemic insecurity across the country. At the core of the various forms of mass atrocities in Nigeria is impunity, and at the core of impunity is the failure of state institutions to ensure the safety and security of all Nigerians, as well as justice for crimes perpetrated. Nigeria needs an effective long term investment in a holistic security architecture that would comprise the efficiency of all aspects of governance and the promotion of human rights.