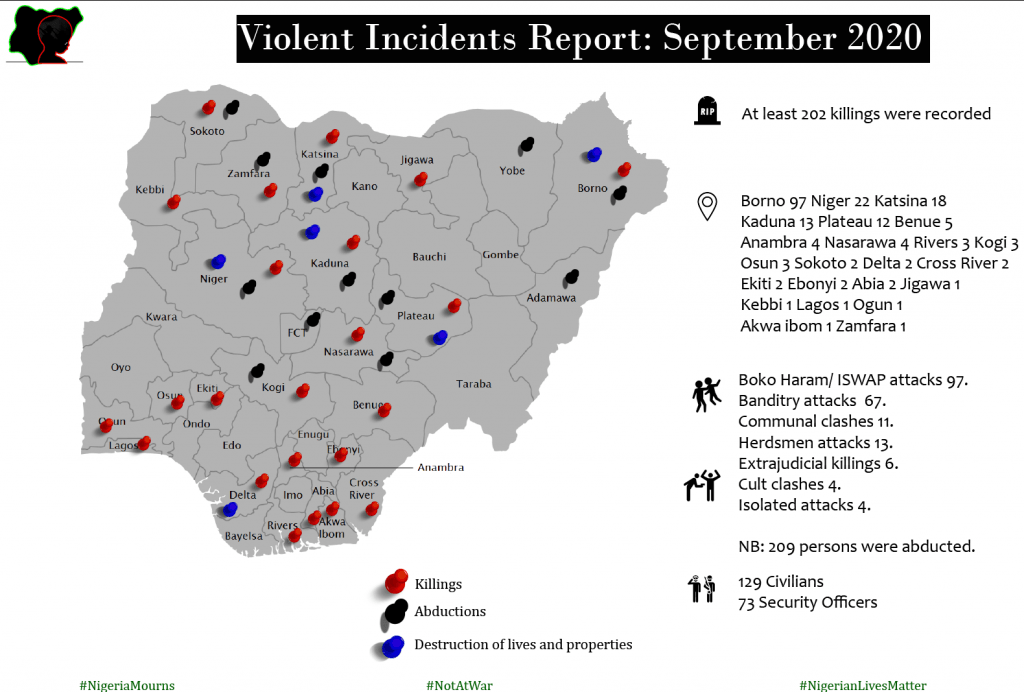 It would seem that a timer went off in Nigeria after October 1, 2020. Citizens, particularly young people in the Southern and Middlebelt regions of the country decided that they could no longer cope with the extra pressure of insecurity from state security agencies alongside non-state actors. Following the release of videos of extrajudicial killings of citizens in September, pockets of protests against the Police Special Antirobbery Response Squad (SARS) notorious for its brutality and inordinate numbers of extrajudicial killings, broke out in Lagos and Abuja, and the #EndSARS movement began.

However, those killings were not isolated, the country has continued on the trajectory of violent mass killings, as in September, at least two hundred and two lives. These include recorded killings resulting from the endemic terrorism, banditry/pillage attacks, targeted and coordinated abductions, and extrajudicial killings perpetuated by security personnel.

Boko Haram/ISWAP Targeting State Security Forces
While state security agents got thumb downs for perpetrating extrajudicial killings on the one hand, an analysis of the data for September continued to point out the deliberate targeting of security officers by insurgents. For instance, at least ninety-seven (97) persons were killed in seven (7) insurgent attacks in Borno State. Of the stated number, at least forty-eight (48) were soldiers. The attacks on soldiers were plotted by insurgents who in seven different incidents attacked the military check points in Magumeri, Borno State.

In another incident, insurgents raided the village of Kurmari, 40 kilometers from Maiduguri, killed four residents in their sleep: burned three of them alive, and hacked a fourth to death.

There were two attempted attacks on Governor Zulum of Borno State by Boko Haram insurgents, who ambushed his convoy. In the first attack, seven Policemen and three Soldiers were killed, while in the second incident, twelve police officers, five soldiers, and nine civilians were killed.
Again, Col Dahiru U. Bako and six other soldiers were killed in a face-off with Boko Haram insurgents. Before his death, he was the commander of 25 Task Force Brigade in Damboa, Borno State.

In total, at least 73 security persons were killed.
The targeted attacks on security personnel by the terrorists and the successes of these ambushes buttress claims by security critics that the Nigerian Army is grossly under-equipped and require more protective gears and intelligence gadget.

Banditry/Pillages
Two (2) Police Officers were killed, by gunmen in an attack on a divisional police headquarters at Gidan Madi in Tangaza Local Government Area of Sokoto State. Tangaza is a border town along Nigeria’s border with the Niger Republic.

At least thirteen (13) people were reported killed and fifty-four (54) others were abducted in 5 reported incidents of attacks by unidentified gunmen in Kaduna State. One of the kidnapped victims is an unidentified Department of State Services (DSS) officer who was abducted along Rigacikun-Afaka Road, Kaduna. His kidnappers have demanded the sum of ₦100m as his ransom.
In a single incident of attack by unidentified men suspected to bandits, twenty-two people were killed and 20 others were abducted in Rafi, Niger State.

Two (2) unidentified Federal Road Safety Corps (FRSC) officials were killed and ten (10) others were abducted at gunpoint at Wudage Junction, Toto Local Government Area of Nasarawa State.
Other incidents of Banditry and random kidnappings were also recorded in Plateau and Katsina States.

In September, at least 6 lives were lost to extrajudicial killings in September. Three of the numbers confirmed are attributed to men of the Nigeria Police Force.

Of particular note was the tragic killing of a 20-year-old man, identified as Ayomide Taiwo, who was shot dead by a police officer at a checkpoint over his refusal to give N50 bribe. This incident occurred in Osun State.
A 28-year-old woman identified as Ifeoma Abugu was arrested by Special Anti-Robbery Squad (SARS) on September 10 when operatives stormed her fiancé’s residence, Adam Ugwunwa, in Wumba village, Lokogoma district of Abuja. By the next day, her body had been dumped at a mortuary. Her family alleges that an autopsy revealed that she had been sexually violated and there were traces of cocaine in her system. Ifeoma’s family refuted the police claim that she self-administered the narcortic. They attested that she was not a drug user. More curiously, how did she access the drug in detention?  No officer involved in her arrest or killing has been identified or arrested.

The right to hold dissenting opinions and to protest has been consistently violated by the Nigerian government and the quashing of peaceful protests have become a norm.  An unidentified man was shot dead during a protest over the spate of insecurity at Jibia Local Government Area of Katsina State by operatives of the Nigeria Police Force.
The Police Force as in most incidents recorded earlier this year have failed to announce an investigation into this killing, or the identity and prosecution of the erring officer.

Summary
Nigeria is bleeding! the numbers of lives lost in September portrays the devastating situation of the security and human rights situation in Nigeria. In the North East, terrorism continues to be endemic; While the North-West on the other hand continues to grapple with banditry/pillage, abductions, and communal clashes.
Ninety-seven (97) deaths were attributed to Boko Haram terrorism and all these killings occurred in Borno State, in one state! The attacks on the State governors convoy further spotlights the continued vulnerability of citizens in Borno State considering that the governor with all of his security details remains prone to ambushes by terrorists.
Nigeria is in a perpetual battle against insecurity, with both security operatives and civilians paying with their lives. Citizens and communities are often caught between the devil of organized criminal groups that government has failed to curb; and the deep blue sea of unruly security agents. The right to live and the right to convene peaceful assemblies, – even when to register citizens displeasure with government, are guaranteed by Nigeria’s Constitution. Organs of the state, in particular – security agents continue to violate these rights with impunity, worsening the clime of atrocities across the country.
Without doubt, Nigeria’s security architecture is in need of urgent restructuring and fortification to ensure that the looming dams of anarchy do not give way at their seams.
It is left to the government to prove by their urgent action, that they understand that Nigerian Lives Matter.