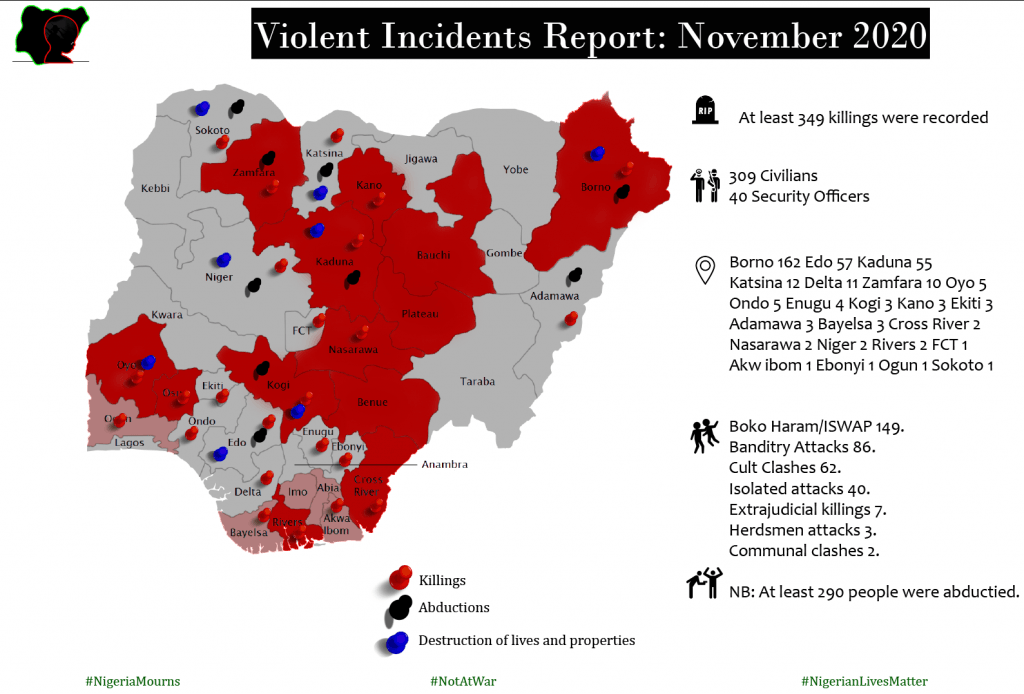 Nigeria’s insecurity index did not improve in the aftermath of the carnage that characterized the #EndSARS protests across Nigeria in October. Several states and communities continued to suffer inordinate quantum of violence. The patterns of the attacks recorded were consistent with previous months: targeted and random abductions, extrajudicial killings, and, the continued spate of banditry and terrorism. At least 349 lives were lost to these mass atrocities in November 2020.
The highlight for the month of November 2020, was the gruesome massacre of farmers in Zabarmari in Borno state. Despite the government’s claim of efforts to contain the prolonged Boko Haram insurgency, the killings and abductions perpetrated by these terrorists have continued, and the clouds of insecurity have grown thicker.
The Massacre of rice farmers at Zabarmari in Borno State is not only devastating but introduces a worrisome twist to the level of insecurity in the region. The farmers in the North East are in a catch-22 situation: stay home and starve, or farm and die – neither option is appealing. In the context of the looming food insecurity and inflation in the country, this incident deepens the jeopardy of not only residents of the North-East but the entire country. The Middle-Belt of the country, otherwise known as the “Food Basket” continued its struggles with insecurity, and with the onslaught of Covid-19, they were either locked down for most of the planting season or fleeing their farmlands due to insecurity. In August 2019, Nigeria unexpectedly closed its land borders. The government’s explanation was that it needed to quell the endemic smuggling of goods from other countries, through the nation’s porous borders. Consequently, this has only exacerbated the scarcity of staple foods such as rice and the growing frustration of citizens across the country. Interestingly, the border closure does not seem to have impacted the proliferation of arms and light weapons. The government has to walk the tight rope of insecurity from violence, and food insecurity.
Out of the 349 lives that were lost to mass killings in November, 149 were attributed to Boko Haram terrorism.
Below are highlights of other incidents that occurred in November 2020:

Boko Haram
As noted above, the attacks by Boko Haram on communities in the North East continued without reprieve. In one incident, Boko Haram insurgents killed 12 people and abducted seven others in a raid on a village near the Chibok town, Borno State. Prior to that, the terrorists had driven into Takulashi village, near Chibok, and abducted 7 people. They shot sporadically and set homes ablaze. In another incident, 5 persons were killed after Boko Haram terrorists shot down a chopper in Banki, Bama Local Government Area of Borno State.  In Zabarmari, At least 78 farmers were decapitated on their farmlands. Zabarmari is known to be within the sphere of influence of Boko Haram’s splinter group – ISWAP (Islamic State West Africa Province). The ISWAP group is notorious for targeting farmers cultivating in their farmlands. However, this particular attack was carried out by Boko Haram. The figures for this incident were contradictory. The UN reported that 110 people were killed, but we were only able to verify 78. The number of farmers missing is still unknown.

Wild, Wild North: Banditry
At least 15 people were killed and many others were abducted during an attack on road commuters on the infamous Kaduna-Abuja expressway. The incident occurred around Gidan Busa, a village not far away from Rijana, which is 133 kilometers from Abuja. According to an eyewitness, 20 vehicles were forced to stop at the bushy and sloppy location where the gunmen laid siege. The location had no security presence at the time of the attack.
Unidentified gunmen stormed Albasu village in Igabi Local Government Area of Kaduna State, on motorcycles and killed 11 people, while 4 others sustained injuries.
in Yola, Adamawa State, unknown gunmen killed 2 persons: one Nigeria Security and Civil Defense Corps officer and one local vigilante; and kidnapped two students.
In a coordinated attack on three villages – Unguwar Maigayya, Tashar Bama, and Dogun Muazu, not less than 7 farmers were killed, while 30 others were abducted by gunmen. These villages are located in Sabuwa Local Government Area of Katsina State.
There were other pockets of banditry attacks across the country.

Stealing People
Abductions were steadily on the rise throughout the month. In the month of November, we recorded the highest number of reported kidnappings throughout the year. :
In what appeared to be simultaneous raids on communities in the Rafi and Shiroro local government areas of Niger State, not less than 25 villagers were kidnapped by bandits in a week. In Ondo State, 16 persons were abducted at Owo and 9 others at Ose.
State security personnel also did not appear any safer than civilians, as at least 9 policemen were abducted in Zamfara. The trade in the blame game that followed their kidnap does not bode well for the nation’s security architecture. The captured officers regained their freedom 10 days later through what the police described as a ‘covert operation’. There has been no information if any of their kidnappers were apprehended.

Cult Clashes
In the past month, Edo State located in South-south Nigeria was theatre to several cult-related violence. Some of the hotspots included Upper Sakponba axis in Ikpoba-Okha Council; Ogida Quarters in Egor Council; New Benin by Constain junction; Erediauwa axis; Satana market on Benin-Ore-Sapele road; Y-junction, Nomayo; Ogida Barrack and Isihor quarter, where members of different confraternities such as – Aiye and the rainbow coalition – clashed. These incidents led to the deaths of at least 47 people, and the vandalization of properties worth billions of Naira. Security forces have alleged that the clashes were perpetrated by prisoners who had escaped from the Benin City Custodial Center of the Nigerian Correctional Senter, in the aftermath of the counter-protests against the #ENDSARS protests.

Extrajudicial Killings
In spite of the #EndSARS groundswell in October, extrajudicial killings by state security agents remained a recurring decimal in November with at least 7 persons killed by security agents.
A security aide attached to the Speaker of the House of Representatives, Femi Gbajabiamila, shot and killed an unarmed newspaper vendor in Abuja, while trying to pave vehicular pathway for his principal. The vendor who was identified as Ifeanyi Chukwu passed on after he was taken to a hospital.
A man identified as Olaoye Akintayo was shot dead by a police officer while watching a soccer match with his friends at a hotel, located in Ekiti State.
In another incident, two unidentified men who allegedly narcotics abusers were shot dead by Policemen from the anti-daba unit of the Kano state police command. This unfortunate incident occurred at the Sharada quarters in Kano State.
Two people were killed in Oyo State, during a clash between officials of the Nigerian Correctional Service and Commercial motorcyclists in Agodi-Gate, Ibadan.
One civilian, one soldier, and one customs officer were killed during a clash between smugglers and men of the Nigeria Customs Service, at Igboora, Oyo State.
The Department of State Services (DSS) apprehended and detained the security aide (Abdullahi Hassan) who killed a newspaper vendor in Abuja, he is currently awaiting prosecution. However, the whereabouts and identities of the other officers who carried out these crimes are unknown.

In Summary: Things Are Not Getting Better

The highlights above paints a dreary picture of the declining state of security and human rights infractions in Nigeria. Impunity remains the mainstay of insecurity in Nigeria, as well as the limited capability of security operatives to curtail attacks.
While Nigeria’s security chiefs have on several occasions reported that they had ‘technically defeated’ the militia groups in the Northeast, the region remains vulnerable to attacks by Boko Haram and ISWAP terrorists; and affected states have in recent months recorded an increase in the number of displaced persons, who have no immediate prospect of returning to their homes. Our tracking reveals that 4,199 people were lost to mass violence from January to November 2020 and 1,104 of these killings were perpetrated by Boko haram terrorists. These are not mere numbers,
these are humans with identities and loved ones who deserve to live and the government failed in its duty to protect them.
The target of farmers by terrorists is daunting. the COVID19 pandemic and lockdown measures have heightened food insecurity across the country, creating a vicious cycle of violence insecurity. Nigeria’s economic conditions have continued to deteriorate, and this has worsened following the drop in international oil demand leading to a decline in revenue. The constant depreciation of the naira alongside the ban on the importation of food products has driven up the prices of staple food items. As a result of this, households are facing deeper impoverishment. There is thus an urgent need for interventions to abate the threat of food insecurity and the loss of more lives. The government needs to stand up to its core duty of securing and protecting the lives and livelihood in other to forestall the impending doom.