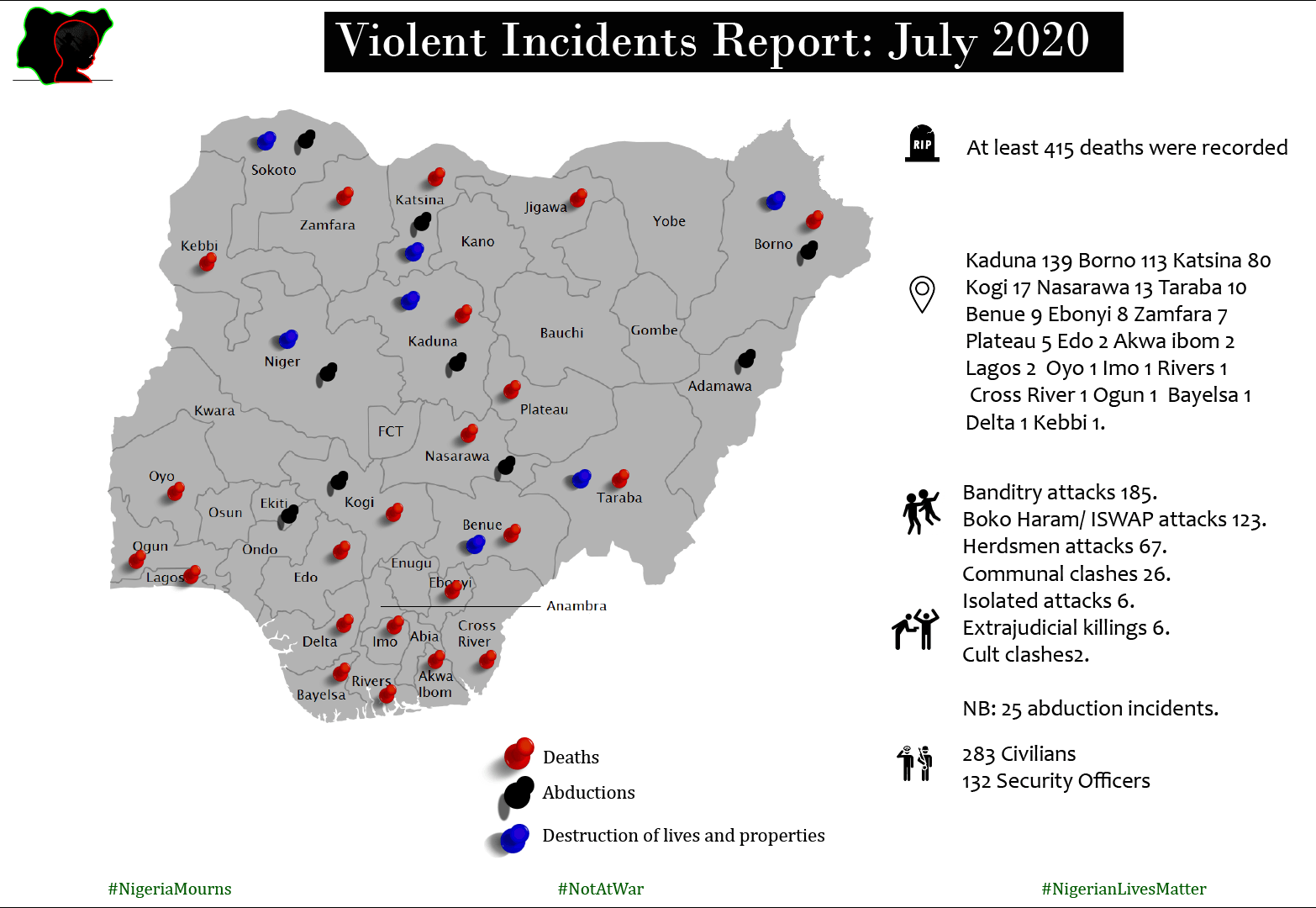 Over the past month, Nigeria’s struggle with inordinate and escalating violence intensified. Our data coalition informs that there were at least four hundred and fifteen (415) deaths occasioned by atrocious violence in July 2020.  Of this number, one hundred and thirty-two (132) were state security agents, this implies that 1 out of every 3 persons killed was a security officer. With the deliberate targeting of security officers, the fate of civilians that they are enthused to protect becomes even more precarious?

The spike in communal violence in Southern Kaduna in the month of July, left more residents homeless, and at least one hundred and thirty-nine (139) persons dead. These killings have continued to spiral despite the curfew imposed by the government in a bid to nip the conflicts in the bud. The IDP situation created by this crisis is creating a tragic humanitarian emergency with very poor response on the side of government.

Other violent incidents within this period included coordinated banditry/pillage attacks particularly in Katsina state, unrelenting terrorism in the North East, and pockets of communal clashes.
Below are highlights of incidents that occurred in July:

In the first week of the month, armed bandits, numbering about 50, abducted 30 persons and killed two vigilante members in Nasarawa Local Area (LGA) of Nasarawa State. Accordin  to the Chairman of the LGA, The vigilantes were ambushed when they had gone after the bandits as they attempted to rescue the victims of the abduction. Accounts revealed that the bandits had rode in on 25 motorcycles, blocked the Udege/Loko road unchallenged for hours, and kidnapped the victims.

As noted earlier, the crisis in Kaduna continued unabated. In this period, no fewer than 30 people were killed by armed militia in an attack on Chibuak and Kigudu 11 Communities in Kauru Local Government Area of Kaduna State. In another incident, armed bandits invaded Kukum-Daji village, Kaura Local Government Area of Kaduna State, killing 24 people.
While the situation in Kogi state has been relatively contained, gunmen killed 14 villagers in an isolated attack on Agbudu village in Koton-Karfe area, Kogi State.
The situation in Katsina state also continued to be troubling. At least 23 soldiers were killed in an ambush by bandits, after an attack in a remote part of the Jibia district in Katsina State. In another developmet, no fewer than 18 persons were killed in Matazu Local Government Area of the State, when armed bandits attacked some villages in the region.

In Borno state, 37 soldiers lost their lives in Damboa, 20 in Kukawa, 15 soldiers in Ngala, 8 at Kondua, and 4 at Kaga); along with several civilians caught up in clashes with insurgents,. Days later, , in Konduga Seventeen Boko Haram militants were killed during the clash in Damboa, Borno
In a video that went viral, four aid workers who were abducted in transit by Boko Haram terrorists in June were shot dead, a month after their abduction.

Herdsmen attacks
Concerns around violent episodes often described as ‘herdsmen’attacks have also continued to feature throughout the month of July across various states, and particularly in the Middle Belt and North-West regions.
15 farmers were shot dead by armed herdsmen. The incident occurred while the victims were working on their farms in of Yargamji village, Katsina State.  At least seven people were killed in Chembe Community of Logo Local Government Area of Benue State when suspected herdsmen attacked the community.
Suspected Fulani militias attacked a family in Exland (Gindin Akwati) of Gashish District, Barkin Ladi LGA of Plateau State and killed a man identified as Daniel Mwantiri.
At least 21 people, including at least one policeman, were killed and dozens of others were wounded after a group of suspected armed herdsmen attacked two communities in Sabon Gari Manchok, and Kaura Local Government Areas in Kaduna state.

Summary
The numbers in July depicts the dire state of insecurity in Nigeria. One hundred and eighty-five (185) deaths were attributed to banditry attacks, while Boko Haram terrorism accounted for one hundred and twenty-three (123) deaths.

The wave of massacres in Southern Kaduna and Katsina state, further highlights the brittle nature of security in Nigeria. The degradation of security has risen exponentially in the past 20 years for a number of complex reasons which we will be discussing in subsequent publication. In this edition, we will focus on the crises in Southern Kaduna and Katsina state.

Since as far back as the 1940s, relations between the Hausa-Fulani and communities in Southern Kaduna had become tense, stemming predominantly from conflicts on land resources and political control. Historically, these tensions often led to deadly ethnic and communal violence. These aggravations have overtime become more complicated due to the introduction of other factors, including climate change which is exacerbating natural resource conflicts – particularly for water, and land; to sustain a rapidly growing population, with no commensurate growth in human development and economic opportunities. Political exacerbation is also a major source of violence. For example, the disruption of the nuanced Christian/ Muslim governorship team was disrupted during the Jonathan administration and occasioned the mistrust of residents. The creation of Emirdoms and the kidnap and subsequent killing of  an Adara chief also inflamed an already combustible situation.

Killings in Katsina state, on the other hand, have risen exponentially and have become worrisome. While a lot of people were caught off guard by the recent sudden spike in  violence in the state, it is important to note that the state had been vulnerable to attacks over the years because of its poor border control with Niger Republic, through which a thriving smuggling hub has occasioned the importation of arms and eased the movement of armed mercenaries. And with the repel of Boko Haram from the North East of the country, there has been a westward movement criminal element, further compounding the already delicate state of Katsina. In the past year, at least 23,000 residents of the state have fled to Niger Republic in fear for their lives. Villages/Communities in Kankara, Dutsinma, Danmusa Local Government Areas have also been abandoned because of these coordinated attacks.

In both Katsina and Kaduna states, impunity is the core factor that continues to embolden attackers and counter-attackers. In a situation in which labeling massacres as “religious conflicts” “herdsmen attacks” or “banditary” creates jail passes for perpetrators of violence, they will continue unabated, and become more audacious in their exploits.
Nigeria’s 1999 Constitution makes clear that the primary responsibility of the government is to ensure the safety, security, and welfare of all who live within its territory. Section 17(2)(c) of the same constitution commands that “governmental actions shall be humane”.

The big question is that is the government fulfilling its constitutional mandate as directed by the constitution? Has it been humane to the victims of mass violence across the country?
Are perpetrators being brought to justice?

What does Nigeria need to do to conquer this cancerous growth ? 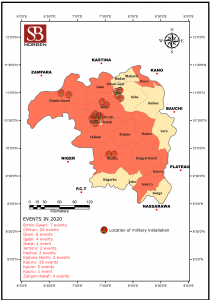