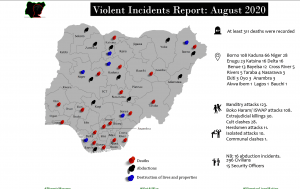 As in previous months, Nigeria recorded a substantial number of casualties from mass atrocities across the country.  The attacks recorded bordered around targeted and random abductions, extrajudicial killings; and, the continued spate of banditry and terrorism. At least 311 lives were lost to these mass atrocities.

Despite government’s claim of efforts to contain the devastating crises in the country, the clouds of insecurity continued to grow thicker. Kidnappings in and around communities, continue unabated. Our data tracking informed that Rafi, Shiroro, and Rijau Local Government Areas of Niger State have become hotspots for raids, arson, and abductions; while the killings in Southern Kaduna have continued unabated. The continued killings have appear to have outraged a wide section of the Nigerian public, as manifested in the threat by lawyers ‘to vote with their feet’ and boycott the Nigerian Bar Association’s Annual convention should the Governor of Kaduna state be allowed to speak at the event. Subsequently, the governor was ‘disinvited’.

Banditry/Pillage
As noted above, the attacks on communities in Southern Kaduna continued without reprieve. In a single attack on five villages of Atyap Chiefdom, in Zangon Kataf Local Government Area (Apiashyim, Kibori, Apiako, Atakmawei, and Magamiya), at least 33 people were killed by armed men. This incident occurred despite the ‘deployment’ of armed military men to patrol and enforced the 24 hours curfew imposed by the state governor. The security personal were nowhere to be found when the villages were attacked.

In other incidents, 11 persons were killed by gunmen in Zango Kataf, Kajuru, and Kachia local councils, the attacks also left many houses burnt and several persons injured.

We recorded another attack in the same local government, which involved the killing of two persons and abduction of several others (estimated at 10) including a police officer and an official of the Nigeria Security and Civil Defence Corps (NSCDC). This attack occurred in Mararaban Rido and Juji communities.

The spate of targeted and random kidnappings suggests that ransoms have become a major source of funding for banditry in the NorthWest, particularly Kaduna, Katsina, Sokoto, and Zamfara States.

The attacks in Niger state have also remained worrisome. In Mariga local government area, 15 persons were killed and 5 others suffered various degrees of injuries after gunmen on motor bikes invaded Ukuru village shooting sporadically into the air as they made their escape.

While Nigeria’s security chiefs have on several occasions reported that they had ‘technically defeated’ the militia groups in the Northeast,  the region remains vulnerable to attacks by Boko Haram and ISWAP terrorists; and affected states have in recent months recorded increases in the number of displaced persons, with no immediate prospects of returning to their homes which have been taken over by terrorists.

The death toll has also continued unabated. In an unfortunate incident, A Boko Haram suicide bomber killed herself and two others in Konduga, Borno. In another incident, at least 13 people were killed in Magumeri, a local government headquarters in Borno State. 3 days later, 2 soldiers, a nursing mother, and many Boko Haram insurgents were also killed after troops fought fiercely to repel a major attack on Magumeri,.

The most alarming development however was the attack in which Boko haram terrorists in about 20 trucks overran the town of Kukawa and engaged state military assets in a ferocious firefight, which lasted about 30 mins, they killed 3 soldiers and took over 100 people hostages.

An unidentified man was shot dead during a peaceful protest over alleged police extortion and intimidation at Ozoro community, headquarters of Isoko North Local Government Area of Delta State.

Another man identified as Collins Osagie, was killed by 5 naval officers in Lagos, whilst trying to settle a dispute between a naval officer,  named  as Awosanya Olufemi, and a spare parts dealer.

At least 21 members of the Indigenous People of Biafra (IPOB) and 2 operatives of the State Security Service (SSS) were killed after the SSS operatives tried to disperse an otherwise peaceful gathering of IPOB members in Emene, Enugu State.

The whereabouts identities of the officers who carried out these crimes are unknown,  and as the time of this report, there have been no public statements by the security forces admitting or refuting this facts, nor information on their intention to investigate nor prosecute these killings.

The highlights above have painted a dreary picture of the declining state of security and human rights in Nigeria. Impunity remains the mainstay of insecurity in Nigeria,  as well as the limited capability of security operatives to curtail attacks.

It is disheartening to report contempt for the rule of law by law enforcement officers. Extrajudicial killings security agents have prevailed with impunity.
What becomes of an insecure nation, where its protectors become perpetrators of the crime they were sworn to counter?

The insecurity situation in the coming months might increase given the rise in the number of unemployed persons. Nigeria’s unemployment rate as at the second quarter of 2020 s was 27.1%, indicating that about 21,764,614 (21.7 million) Nigerians remain unemployed. Nigeria’s unemployment and underemployment rate (28.6%)  has reached a combined estimate of 55.7%. Coupled with this, its  double digit inflation rate has hit 13.39% and is rising. The struggling economy, fluctuation, and unemployment leave Nigerians further impoverished, frustrated and desperate. As is well attested globally, poverty is a major trigger for insecurity.

The question remains: Is the government doing enough to uphold its primary responsibility of ensuring the safety, security, and welfare of all who live within its territory?

Another important question is: what are citizens doing to hold the government accountable? The Nigerian dream lies between the grasp of their actions and inactions.