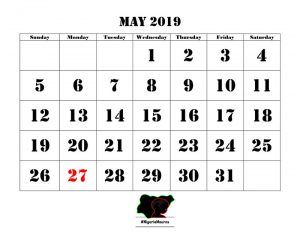 From Rivers state in the geopolitical South-south region of Nigeria, to Zamfara in the North-west region, the month of May saw an overwhelming increase in the degree and extent of mass killings around the country. Despite claims of control over insecurity by security heads and the President, several attacks from insurgents, bandits, cultists, herdsmen, amongst others, have occurred, leaving a host of casualties and the reported deaths of 310 citizens.

It is worrisome that the government of Nigeria has been unable to beef up its security architecture to ameliorate these recurring attacks, nor have they been able to prosecute a single person to account for these crimes. Even more worrisome is the fact that citizens have lost confidence in the ability of the government to safeguard the lives and property of its citizens, and as they continue to live in fear of attacks, many have taken to securing arms to protect themselves. One can only imagine the implications this has in a country that is already overrun by pockets of violence, and a surge in the proliferation of arms.

The recurring violent incidents brings to mind several questions, among which are: why do these attacks abound despite the deployment of security personnel to troubled areas of the country? How useful are the intelligentsia of the security forces to the prevention of these mass atrocities?

As we reflect on the questions above, it is imperative that we continue to demand government’s responsibility to protect the lives of its citizens, and justice for the crimes perpetrated. The security of every Nigerian live must be prioritized, for security is our human right!

4 killed during Farmer/Herdsmen clash in Ogun

4 persons were killed during a chaotic clash between farmers and herdsmen in Iwoye-Ketu town, in Imeko-Afon Local Government Area of Ogun State.

3 hacked to death by suspected herdsmen in Jema’a, Southern Kaduna

3 unidentified persons were found dead in their farm. It has been alleged that they were killed by assailants who invaded their farms in Gerti village, Kaninkon Chiefdom.

11 killed in Reprisal Attack by Alleged Herdsmen on Taraba Villages

11 persons were killed after suspected herdsmen stormed Murbai, Kisbap, Sembe, and Yawai – Abbare villages of Ardo-Kola and Jalingo Local Government Areas of Taraba State, to avenge the death of a herder who was allegedly killed.

14 bodies of men killed by Boko Haram insurgents were discovered at Duwabayi village, near the garrison town of Monguno in Borno state, two days after they launched an attack on a military base.

15 soldiers killed during a Boko Haram attack in Borno

15 soldiers were reported killed during an attack in a military base in Magumeri Local Government Area of Borno State.

5 soldiers were killed in a fierce battle with Boko Haram terrorists during an attack on the military base in Magumeri in Borno State.

4 Nigerian Soldiers, others killed by Boko Haram terrorists in Maiduguri

At least 11 persons, including 4 soldiers were killed after Boko Haram militants attacked outskirts of Maiduguri.

7 persons were killed as Boko Haram ran an explosives-laden vehicle into a convoy of vehicles in Maiduguri.

9 persons were killed as Boko Haram Militants attacked and destroyed power transmission station in Molai, Maiduguri, and carted away the military gun truck stationed there.

Boko Haram militants attacked Madu Muasaha camp, in Dikwa Town, Borno State. They opened fire on the residents and killed 2 refugees who were eating before sunrise, ahead of the Muslim Ramadan fast.

3 Nigerian troops were killed after Boko Haram attacked military base in Borno.

At least 20 people were killed and others are missing after militants ambushed a convoy transporting civilians from Sabon Gari to displacement camps in Damboa in Borno State.

1 killed during an attack in Zamfara

May stabbed to death by assailants in Rivers

A man identified as Mr Peeple was killed on the International Workers’ Day. He was stabbed with knives till he bled out. Before his death, he was a pastor with the Assemblies of God Church and a native of Opobo, in Opobo/Nkoro Local Government Area of Rivers State.

Two policemen and an unidentified gunman were killed during a gun battle between policemen and unknown gunmen at a night club located along Woji Road in Port Harcourt, Rivers State.

35 Killed by gunmen in Zamfara

A terror attack was witnessed in Shinkafi Local Givernment Area of Zamfara State after armed bandits murdered 35 innocent people in their homes.

Bandits attacked the only police station in Balle village of Gudu local government area of Sokoto State, killed the district head, and set some vehicles ablaze.

3 killed as gunmen attacked a Funeral ceremony in Rivers

1 killed, 3 Injured during an attack on Katsina Village

Not less than 20 people were reportedly killed by gunmen in Dan Marke Z, Dan Sabau and Karya, villages in Kankara Local Government Area of Katsina State.

7 killed by gunmen in Taraba councils

The Public Relations Officer (PPRO) for the state command, David Misal, confirmed the death of 7 persons by unknown gunmen in Wukari and Donga council areas of Taraba State.

A lecturer in the Igbinedion University, Okada, identified as Kelvin Izebeokhai was killed by gunmen, operating near Okada junction along the Benin-Lagos highway.

Hairstylist killed by Abductors in Rivers

A popular 39-year old hairstylist identified as Destiny Balogun, was shot by kidnappers who were trying to abduct a lady along the Rumuola/Rumuokwuta Road, Port Harcourt.

At least 1 person was killed and 17 others were abducted during an attack on the Evangelical Church Winning All (ECWA) in Birin Gwari Local Government Area of Kaduna State.

1 Killed by gunmen in Plateau

The Police Public Relations Officer confirmed the death of Mr Mahan Ishaya, a 42 year-old man, who was shot dead by Gunmen in Daffo town of Bokkos Local Government Area of Plateau state.

26 persons killed by gunmen in Katsina

Bandits on Tuesday attacked some communities in Katsina State, killing no fewer than 26 persons, leaving scores with varying degrees of injuries.

3 dead during an attack by Gunmen in Rivers

2 Soldiers killed during face-off with bandits in Rivers

Two soldiers of the Nigerian Army were killed in a gun duel with heavily armed gunmen in Udoda/Okolodiama Community, Engenni in Ahoada West Local Government Area,

Gunmen kill family of 6 in Jos

One killed, three kidnapped in Bandit attacks on villages in Katsina

One person was killed during an attack launched by bandits on Biya-ka-Kwana village in Batsari council area of Katsina State.

23 killed by bandits in Zamfara State

At least 23 people were killed in retaliatory attacks by bandits on Kabaje and Tunga communities in Kaura Namoda Local Government Area of Zamfara State.

Not less than 26 persons slaughtered by bandits in Jigawa

26 people were reportedly killed by suspected bandits during a mob clash in Kabaje and Tunga communities of Kauran Namoda Local Government Area of Jigawa State.

Man Stabbed to death by brother-in-law

A man identified as Okeh, was stabbed to death by his brother-in-law at Afikpo/Akwuzu Waterfront, Mile 1, Diobu, Port Harcourt

1 killed during clash between APC and PDP supporters in Kogi

A man identified as Ismaila, Yakubu Agba, who served as the APC youth leader in Dekina local government was killed in a clash between the parties.

Gunmen attacked the Lafia residence of the Nasarawa State Commissioner for Higher Education, Chief Clement Uhembe, and killed a 400-level student of the Federal University, Lafia,

An All Progressive Congress Chieftain identified as Benson Omunakwe was killed by suspected gunmen in Rivers State.

Code of Conduct Staff assassinated at home in Rivers

Mr. Emmanuel Jack, a staff of the Code of Conduct Bureau, Rivers State, was shot dead in his home at New Road, Borokiri, Port Harcourt.

A 41-year old man identified as Chima Jonah, was shot to death in the presence of his wife at their Rumuekini residence in Obio/Akpor Local Government Area.

Policeman killed by Gunmen in Rivers

Gunmen in military camouflage attacked the convoy of the Chief Medical Director (CMD) of the University of Port Harcourt Teaching Hospital (UPTH), Prof. Henry Ugboma, killing a police inspector attached to the Professor.

A man identified as Mr. Promise Umunaegbu, a final year student of Chemical/Petroleum Engineering at the Rivers State University, was shot and killed by some gunmen in his community, Apani, in Ikwerre Local Government Area.

4 people who were identified to have been part of the peace committee from Ebonyi State were killed over a long term land dispute between the two communities in Ebonyi and Benue States.

6 persons were killed and several houses burned down, in a communal clash between Kona and Fulani groups in Jalingo Local Government Area of Taraba State.

Residents of Dutse Uku and Angwan Damisa in Jos North Local Government, protested after the lifeless body of a man identified as Mr Enoch was discovered. 5 people were killed as a result of the clash.

2 persons murdered during a cult clash in Calabar

Two young men identified as Bobo a.k.a. Ogbobga PDP and Mr. Bright were mobbed and burnt to death in Isiodu, in Emohua Local Government Area. Bobo was allegedly a cult leader who terrorised people.

15 killed; some beheaded by cultists in Rivers

At least, 15 persons were killed and some beheaded by suspected cultists in Kono Bo-ue community in Khana Local Government Area of Rivers State in a cult clash in the area.

Two unidentified persons were killed in Rumuche, Emohua Local Government Area. One was beheaded and the other, stabbed to death in a gang related violence in the community.

A young man identified as Daniel Agori was tortured and shot dead by the policemen attached to the Inspector General of Police (IGP) Monitoring Team in Aluu, Rivers State.

1 Killed after police shoot into angry crowd in Kaduna

A man was killed after Policemen shot sporadically into a crowd, in order to prevent a mob action in Kaduna.

2 members of the Movement for the Actualization of Sovereign State of Biafra (MASSOB) lost their lives, as police shot into a crowd of protesters in Anambra State.

2 killed by angry mob in Kaduna