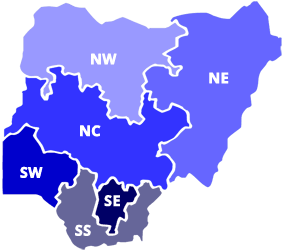 Nigeria’s North-West region, comprising seven states – Kano, Kaduna, Kebbi, Katsina, Jigawa, Sokoto, and Zamfara, has been a hotbed of violence of varying contexts. Plagued by over a decade long history of mass violence due to banditry, jihadist activities, pastoralist crisis, resource conflict, ethno-religious crisis, and other forms of criminality, including abductions and pillages by organized criminal gangs, over 9,000 persons have been killed, 200,000 displaced and 60,000 fleeing to neighboring countries for refuge.

In times past, conflicts over land, water, and mineral resources, as well as political and ethno-religious conflicts were at the center-stage of violence in the region. While these conflicts have now been exacerbated by climate change and consequent desertification, in recent years, these conflicts have metamorphosed into deadlier warfare, catalyzed by:

Deadly attacks from the groups aforementioned have led to a total breakdown of law and order in many communities in the region, particularly in Zamfara, Katsina, and Kaduna states, as state security forces have proven incapable of containing the insecurity. The resultant effect of this has been the usurping of territories by the prevailing jihadists and/or bandits in some affected communities, and the consequent spread of ungoverned spaces within the region. It is important to highlight that the mass atrocities prevalent in the North-West has provoked a southward migration of pastoralists from the region to areas of the North-central region, and Taraba state in the North-east, and the Southern regions of Nigeria.  The migration of this group is relevant to the analysis of conflict in Northern Nigeria, particularly because upon this migratory trend, the frequency and intensity of organized crime and pastoralist conflict in the North-central and Southern regions of Nigeria have seen a significant surge.

In the past five months, particularly with the advent of the Covid-19 pandemic to the country, mass atrocities in the troubled North-west region has been on an alarming increase. First off, it is important to reiterate that while state security forces had been deployed to quell the insecurity and restore stability in these areas, the lack of human and capital resources have enfeebled their efforts to restore calm. More so, the announcement of lockdown measures by the Federal and State Governments to contain the spread of the pandemic, and the use of state security forces in the enforcement of these measures, as well as other security concerns across the country, further dissipated resources and state security presence from the region. Consequently, between January 2020 and now, Nigeria Mourns has documented the killings of at least Seven Hundred and Seventy-Two (771) people in the North-west region. Casualties include community members, vigilantes and security personnel across Katsina, Zamfara, Kaduna and Sokoto states.

State response to ameliorating the violent conflicts in the region have also been minimally effectual. While it has been established that the Federal Government’s pledge to end the violence in the region through the deployment of security forces have been disappointing, responses by the governments of the states most impacted by mass atrocities have largely bordered around dialogues and negotiations with some armed groups (excluding the jihadists). These dialogues and negotiations have presented offers of amnesty, rehabilitation, and reintegration, as well as the establishment of designated grazing areas in return for the disarmament and renouncement of all violent inclinations.

In summary, the spiraling conflict in the North-west region of Nigeria, like most conflicts, is multidimensional and has evolved due to various factors, some of which have been mentioned above. Despite the extensive damage done in the region, as well as the increasing casualties that emanate from the conflicts, and the ripple effect in other regions of the country, asides perpetual vows to bring the perpetrators to justice, reactions by the Federal Government have been passive. Citizens, on the other hand, have been plunged into a state of despondency, creating an atmosphere of panic, distrust, and consequent calls for self-defense which are likely to result in anarchy. The government must exert decisive actions to strengthen state security in the region, reinforce its commitment to secure the lives and property of every Nigerian citizen, and ensure accountability for mass atrocities.