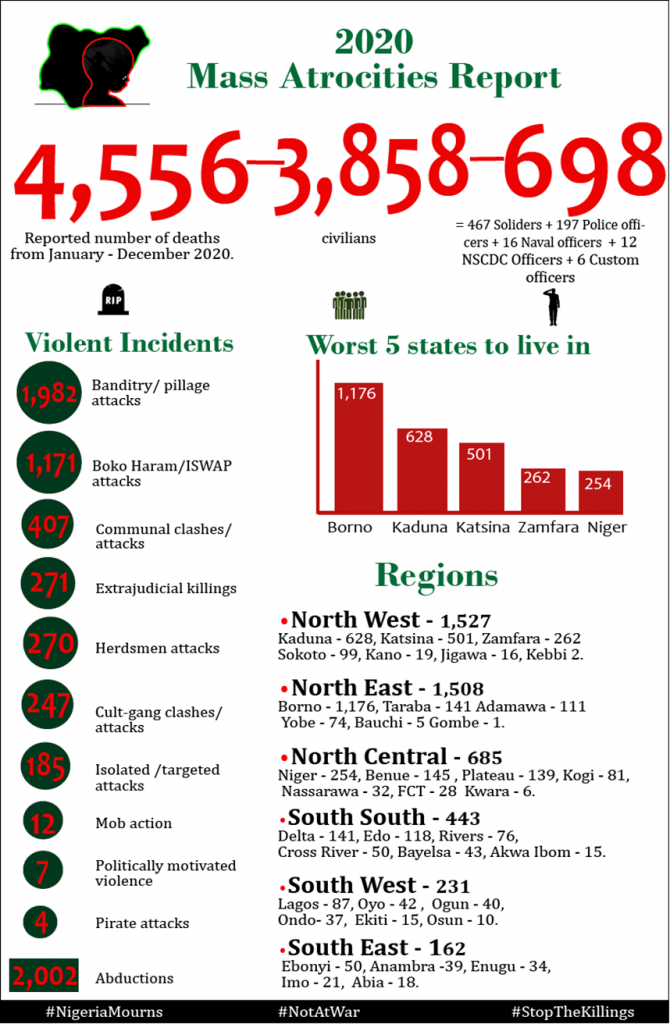 It is not news that Nigeria is in a precarious place right now and in need of urgent interventions to restore peace and security across the nation.

Our tracking of mass atrocities across Nigeria for 2020, (indicated through casualties of violent attacks, clashes, terrorism, kidnappings, and extrajudicial killings) informs that at least four thousand, five hundred and fifty-six (4,556) lives were lost between January and December 2020. A glaring spike of almost 43% in the number of casualties in comparison to the 2019 figure of Three thousand, one hundred and eighty-eight (3188). Of the above number, three thousand, eight hundred and fifty-eight (3,858) were civilians, while 698 were state security agents. For the second year running, for every 5.5 deaths recorded, at least 1 of them was of a security officer.

Kidnappings were a recurrent decimal across the country. Other forms of atrocities included: arson, community displacements, forced evictions, extrajudicial slum demolitions, security force brutality (often accompanied by arbitrary arrests), incursions on the civic space, especially the brutalization of protesters, enforced disappearances, violent gags on media freedoms, and a spike in gender-based violence precipitated by impunity and disproportionate state responses. As a matter of fact, nearly all of the atrocities recorded were engendered/ perpetuated by cycles of impunity.

The landscape of organized crime in Nigeria remained relatively unchanged with its traditional actors: the terrorist groups Boko Haram, and The Islamic State in West Africa or the Islamic State’s West Africa Province (ISWAP) continued to hold sway in the North-East with hybrid spread to the North-West and North-Central, other forms ‘herdsmen’ bandits/pillagers, gang marauders, kidnap syndicates, an assortment of cult-gangs, continued across other parts of the country, and at its southern borders -pirate groups on the Gulf of Guinea.

The internal security response system landscape also remained largely the same with the armed forces taking the lead on security issues in most parts of the country – especially in the North and Middle Belt regions of the country. The police force continued to handle the softer law enforcement issues, but have remained overwhelmed. The calls for reforms trailed both the military and police formations. For the military formations, the calls for the retirement and replacement of the service chiefs, all of who had served beyond their statutory retirement age, continued to echo through the year, as it had in recent years. The call for police reforms also rang through the year cumulating in the #EndSARS movement. The launch of regional security apparatus in the South West, and promise of the same in the South East also point to attempts at reforms.

The security and welfare of the nation’s security forces also did not seem to improve in 2020. Rather, military personnel were punished for demanding better equipment and conditions of service. As noted in this report, 1 in every 5.5 killings recorded in 2020 were of security personnel. This data did not improve from 2019 figures. It is worrisome that security officers and their weapons continue to be deliberately targeted.

Worrying indicators on the mental health of frontline security agents were also noted for the third year running. It would appear that because they do not receive structured psychosocial support, a number of them manifest symptoms of Post Traumatic Stress Disorder (PTSD) with sometimes tragic consequences. For instance, in December 2020, Police inspector John Markus committed suicide in Abuja, after fatally shooting his colleague Matthew Akubo. Shortly before the tragic incident, he had indiscriminately fired shots in the air while on duty as a guard. Earlier in September, a soldier on the frontlines in Yobe state, North East of the Country had also committed suicide. In February 2020, another soldier had shot 4 colleagues before killing himself in Borno state. It will be recalled that in 2019, we had documented similar incidents of security forces suicide, and PTSD related shooting of colleagues. Troubled from within and without, state security agents are highly vulnerable and in need of protection.

Civilians also continued to be vulnerable to attacks by state security personnel. At least two hundred and eighty (280) persons were extrajudicially killed in 2020. Impunity also remained the core cause of this form of atrocity, as there were very few arrests and convictions made, even in instances in which the killers were obvious.

The patterns of mass atrocities across the country continued to bear regional nuances, but the lines are increasingly becoming blurred. Insurgency, pillages, and communal attacks characterized the major forms of atrocities in the North, while the South struggled with rival cult-gang attacks, extrajudicial killings, politically motivated killings, and mob lynching. Other forms of manifested atrocities across the country included: arson, community displacements, extrajudicial slum demolitions, security force brutality (often accompanied by arbitrary arrests), incursions on the civic space, especially the brutalization of protesters, enforced disappearances, violent gags on media freedoms, and a spike in gender-based violence precipitated by impunity and disproportionate state responses. As a matter of fact, nearly all of the atrocities recorded were engendered by impunity.

Economically motivated Kidnappings and pillage/banditry attacks were a recurrent decimal across the country. However, these incidents presented differently in the various geopolitical zones. In the Northern States, the most common pattern of attacks were brigands’ pillage of communities – mass kidnapping residents, burning homes and farm lands, rustling cattle, and sporadically killing residents. The nuance in the Southern parts of the country were more of selective kidnap of residents in communities by organized criminal groups, cult-gang attacks or clashes, highway attacks, and attacks on farmers and their farmlands by herders insistent on grazing their cattle in cultivated farms. In addition, highway abductions remained prevalent throughout the country in pretty much the same pattern.

Extrajudicial killings were more frequently reported in the South than in the North of the country. We however noted the continued pattern of organized criminal groups killing security officers and dispossessing them of their weapons.

Citizens frustration with the state of affairs was palpable throughout the year and especially in October. The #EndSARS movement was not just about police brutality, but about insecurity, and social injustice. It was a cry for good governance starting with one theme. Other citizens led movements on security that elicited viral hashtags included the #NorthernLivesMatter movement, and the #SecureNorth protests. It would seem that the communication gap between citizens and the government at the centre became wider, with the Federal government considering these several protests to be ‘politically sponsored’, and met most of them with brute force.

State governments also seemed to have registered their dissonance and lack of faith in the government at the centre to provide security leadership. The Western Nigeria Security Network (WNSN) codenamed Operation Amotekun, subscribed to by all of the governors of South Western Nigeria states, for all intent and purpose was a vote of no confidence in the federal government’s ability to secure their states.

Ongoing & Burgeoning Humanitarian Crisis: With the insurgency in the Northern parts of the country and various pillage, arson and herder attacks in the Middle Belt, coupled with  government demolitions of settlements, Nigeria continues to record high numbers of internally displaced persons sheltering in IDP camps in the North East and in various settlements, with their host communities spreading westward and southward. Many cities have become inundated with the influx of destitute youth, women and children who take refuge in slums and other settlements – only to watch them displaced again due to demolitions or insecurity. According to UNHCR Official figures of internally displaced persons in the North East region alone, are estimated at 2.7million people; but we believe that these figures are higher as they do not include those displaced to the Middle Belt, the North West, the South South and other areas as a result of insecurity and other government actions in places such as Oyigbo in Rivers State. Even in the other regions named, hundreds of thousands of people have been displaced in their own theatres of violence.

In August 2020, the government of Borno state encouraged nearly two million internally displaced people (IDPs) in Maiduguri and other areas to return to their communities. This decision was made disregarding the precarious state of the communities. Upon their return, some have again suffered attacks and were again displaced. For instance, Boko Haram insurgents attacked a community in Kukawa Local Government Area and abducted at least 100 people. Within this period, Borno state governor Babagana Zulum’s convoy was attacked by Boko haram insurgents, however, while the governor survived, at least 18 people died. It was the second attack on the governor’s convoy in just one month. In 2020 there were 4 attempts on the governor’s life.

The government needs to do more work to ascertain the number of IDPs, to plan interventions and to rehabilitate IDPs across the country while improving security.

How to Stem the Tide

Projections for peace and security in Nigeria remain bleak. This state of affairs does not bode well for the peace and the welfare of its citizens. More than ever, the country was strongly divided along ethnic and religious lines. These divides are largely attributable to the optics of bias in governance which suggest the preference of certain ethnic groups or religion. In other instances, they are inherent fears in a highly unstable country in which most citizens feel ‘marginalized’ by government, based on their socioeconomic status, state of origin, gender, ability, or religion.

Impunity in its various forms, particularly – corruption, state capture and disregard for the rule of law, continue to jeopardize security across the country, especially with very limited state resources and weak institutions.

We reiterate the recommendations made in our 2019 report for stemming the tide: